Hey all! Today I bring you a review of a book that I’ve been looking forward to read ever since I read the first few chapters as a preview! I am glad I read this after the last semester was done because it would have definitely kept me up all night! 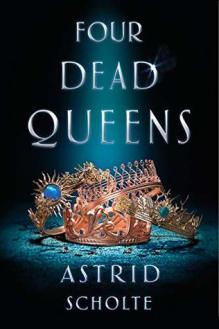 Summary: The kingdom of Quadara was once one kingdom, but after the king died, four Queens took his place. For each quarter of the kingdom, one Queen is responsible

Besides the ruling, each Queen represents her own quadrant. The borders between the quadrants are permanent. However, to Keralie, borders don’t mean anything. Keralie is an originally Torian smuggler, working for Mackiel. Anything she smuggles can be sold at the auction. She’s been working for Mackiel for quite some years, and she’s his best. One day, he sends her to steal a comm case, with chips in it. Comm chips are used to recorder memories on, and she needs to get them off of a messenger. The messenger is from Eonia, and when he shows up at the auction, she knows something is wrong. When they end up in a situation where the only possible option for her seems to be to swallow the chips. From the moment she sees the memories recorded on the chips, everything changes. The memories she sees are the deaths of the Queens, all four of them. Together with Varin the messenger, she has to find out who did this, and why the palace hasn’t told anyone yet.

This book was honestly AMAZING. I got to read a preview on Netgalley earlier this year, talked about it, and I preordered the book as soon as I was done. Now, I finally had time to read it and good gods, this was one hell of a ride (in the good way of course)!

Most books, as I’ve mentioned before, have a “twist” that you can see coming or not. Most times, I can guess the twist somewhere halfway and sometimes even before I start reading, and luckily this doesn’t take away a lot of fun. This book, however, is full of twists and honestly, none of them did I see coming! At some point I really thought I had it, and even then I was pleasantly surprised to find it was absolutely not the thing I thought it would be.

The plot is quick in the beginning, slows a little in the middle, and just leaps towards the end, and I flew through most of it in one afternoon. The story is told from Keralie’s point of view, and the Queens have some chapters as well. I came to care for the Queens more than I thought, and the story they tell is how they deal with the murders, how the rules affect them in the palace, and how well they know each other. It was amazingly frustrating to read the things about the Queens and then read a chapter from Keralie in which she just has to guess the same things!

The characters are all well-evolved. Keralie is a smuggler, and she knows how her job, how her life works more than anyone. Working together with anyone, let alone a messenger from Eonia, is difficult. Trusting anyone is not something happening at all, not the way she’s learnt it. She is from Toria, always on the lookout, always wanting to know everything, and Varin just seems like a stone-cold brick from Eonia, not showing or telling anything. Throughout the book, they get to know each other, a little, and learn how the other works as well. I liked that it’s not immediately love at first sight, because it definitely isn’t.

The Queens are very well representing their own quarter, each one exactly as their own land should be. However, there are a lot more secrets underneath, and finding them out was like discovering hidden candies in the store. Each chapter brought me more and more information and more interest to read on.

The ending came together really well, at some point I had no idea how this was ever supposed to end well, and I can’t say a lot without spoiling, but this book really had me at the edge of my seat at most times.

All in all, I loved it, and I really look forward to reading more of this author’s work!

Check out all my reviews here!

This site uses Akismet to reduce spam. Learn how your comment data is processed.